Here we are in Holy Week … the most important week of the year.

And in 4 days our Lord will rise!

This poem presents a unique viewpoint of Christ’s resurrection. I hope you enjoy it as much as I did.

The Death of Death

Father Time met pale King Death sitting by a tomb.
“Hello, O Friend, I guess you’re here to seal somebody’s doom.”
“You might say that,” sly Death replied, a smile lit up his face.
“Herein lies that Jesus man who said He’d save the race.
“And you, O Time, why did you stop? Don’t you have other things to do?”
“Well,” said Time, “I just come each day to draw the vale and let the morning through.
But you, O Death, why do you watch just one grave with all your vast domain?
Seems like you’d be out ramblin’ around an smitin’ folks with pain!”
“Well,” sneered Death, “This one’s special—Jesus challenged me they say.
He claimed He would lie here just three days then stand and walk away.
Now I’m the conqueror you know; they don’t talk down to me.
When I come in to knock ‘em down, it’s for eternity.”
“I can sure testify to that,” responded Father Time.
“I haven’t seen one escape your grasp since you’ve been in your prime.
But I have other things to do so I must be on my way.
I’ll see you when I come back again to start another day.”
So stately Time went up the hill to bid the sun to rise,
And left Death standing by the tomb looking strong and wise.

The next day Time passed by again, “And how are things” he queried.
“Rather quiet,” Death replied, “I’m beginning to get weary.
I won’t be here when you come by again about this time tomorrow.
Since Jesus can’t do what He claimed, I’ll go spread some grief and sorrow.”

The next day Father Time was quite surprised when he came back to see
Old Death a quivering on the ground in frightful agony.
His eyes were set, his throat was marked, his clothes in disarray.
It wasn’t difficult to see that Death had had his day.
“What happened, Death?” asked Father Time. “What makes you look so bad?
I’ve never seen you shake this way or look so scared and sad.”
Death pulled himself upon a rock, looking sick and humble.
He hung his head and wrung his hands, and Time could hear him mumble.
“I was sitting there on that tomb before the dawn, and I was about to take my leave.
When all at once an angel grabbed that stone and gave a mighty heave.
That massive stone jumped off the door and skipped on down the hill.
Then everything grew dark and quiet, as if the earth stood still.
Then I saw Jesus—He was standing at the entrance, and He didn’t move or speak.
He just looked at me and all at once I felt so tired and weak.
He came and got a hold of me and threw me to the ground.
He put His foot here on my neck, and He took my keys and crown.
Jesus said, ‘The plan’s all finished now; redemption’s work is done.’
And two angels came and talked to Him; they glistened like the sun.
And as they passed the garden gate, I heard Him say to them.
‘I now have set the captives free and given gifts to men.’”

Time and Death met once again over there by Saint Peter’s gate.
“And how are you?” asked Father Time. “I’ve been wondering about your fate.”
Old Death was quiet for a moment and didn’t say a word.
But when he finally spoke to Time, he was gentle as a bird.
“I’m just a lowly servant now,” said Death, “there’s very little time to roam.
I just push open this big gate and help the saints go home.”

This week’s Genuflect celebrates the resurrection of our Lord. Why it lasts more than one day, some facts about the events, and special prayers for Holy Week.

Be sure to scroll down to see the bonus I have for you … free inspirational wallpaper downloads for your desktop and phone.

Have a Blessed Easter … He is Risen!

Shop the world’s #1 Catholic store with more than 16,000 items for everything from medals, jewelry, rosaries, books, home goods, and more. You’ll find a wide selection of gifts for upcoming holidays like Easter and Mother’s Day … and gifts for your loved ones’ special occasions like Baptism, First Communion, Graduation, and Wedding. You’ll even find the perfect gift for teachers, armed forces, and first responders. And don’t forget to treat yourself to something special to dive deeper into your Catholic faith. See The Catholic Company’s large selection here.

A user’s guide to Sunday, April 21, Easter Sunday. God’s ways are not our own. In a surprising divine choice, two of the first witnesses of the Resurrection are those who, from a superficial point of view, seem least qualified.

Celebrating Easter – The Octave and The Season

Easter is not a day but a season of 50 days: the octave which is eight days of high celebration beginning on Easter Sunday followed by 42 more days of rejoicing concluding on Pentecost. Here are some ideas for a fitting and fruitful celebration of the joy of Eastertide.

When Did Jesus Rise From The Dead?

Was it on Saturday night or Sunday morning? In the Gospel accounts, Jesus is said to have risen from the dead “on the third day” or “after three days.” This appears to be a contradiction in terms, and could make it appear that there are multiple possibilities as to when Jesus rose from the dead. Here are several explanations.

5 Facts About the Crucifixion of Jesus

On the Christian Holy Day known as Good Friday, observed the Friday before Easter, Christians commemorate the passion, or suffering and death of Jesus Christ on the cross. Many believers spend this day in fasting, prayer, repentance and meditation on the agony of Christ on the cross. Here are five facts about the crucifixion of Jesus.

How Much Blood Did Christ Lose During His Passion? Exact Amount Revealed to These 3 Saints

Have you ever wondered how much blood Jesus actually lost during his Passion? Christ revealed astounding details of his Passion in his “True Letter of Our Savior Jesus Christ,” including exactly how much blood he lost. St. Elizabeth of Hungary, St. Bridget, and St. Matilda all wanted to know more about Jesus’ Passion, so they fervently prayed for a revelation from Christ. Here’s the answer … and the five promises Jesus made to those who honor these drops of blood.

I recently learned about The Good Friday Prayer. My Aunt mentioned it to me … said she knew my mother prayed it. So I’m not sure why I’m only now hearing about it. But I’m glad to know about it now … I plan to begin this tradition on Good Friday. And I’m happy to pass it along in case it’s new to you too.

Here are the Plenary Indulgences Available During Holy Week

We all have the opportunity for receiving a plenary indulgence each day of Holy Week. Then Easter Octave. Here’s how to gain them for ourselves and loved ones in purgatory.

New Website Offers Close Up Views of Shroud of Turin

The venerated object of Christian history has been shrouded in mystery for centuries, but a new website has been launched in hopes that more people around the world, including researchers, will be able to gain better insights into it.

Jim Caviezel: Take up Your Cross and Become a Warrior for God

Hollywood and Catholicism do not go together. But actor Jim Caviezel is not afraid to combine his lifelong devotion to Catholicism with his acting career. He has accepted roles in several religious movies, like Mel Gibson’s “The Passion of the Christ” … and he uses his celebrity to spread the Lord’s message. Like in 2018 when he spoke to a group of college students at the FOCUS (Fellowship of Catholic University Students) conference. Watch Caviezel’s 2018 impassioned speech urging us to speak up and become a warrior for God.

What a Parking Ticket Taught Me About Our Lord’s Passion

Matt D’Antuono writes: Good Friday is approaching, and one of the aspects of the Passion that continually grabs my attention is the fact that Jesus was falsely accused. He was made a victim of the political machine and individual ambition. And yet Jesus submitted to and endured the torture of his Passion. He knew his own innocence better than anyone else, but he did not fight back. I confess that I do not know what this was like for Jesus, but I had the opportunity to identify, just a bit, with Jesus in his false accusation a couple of years ago.

Take This Week’s Inspiration With You

Please use these buttons to share this issue of Genuflect with your friends, family, and followers. Thank you! 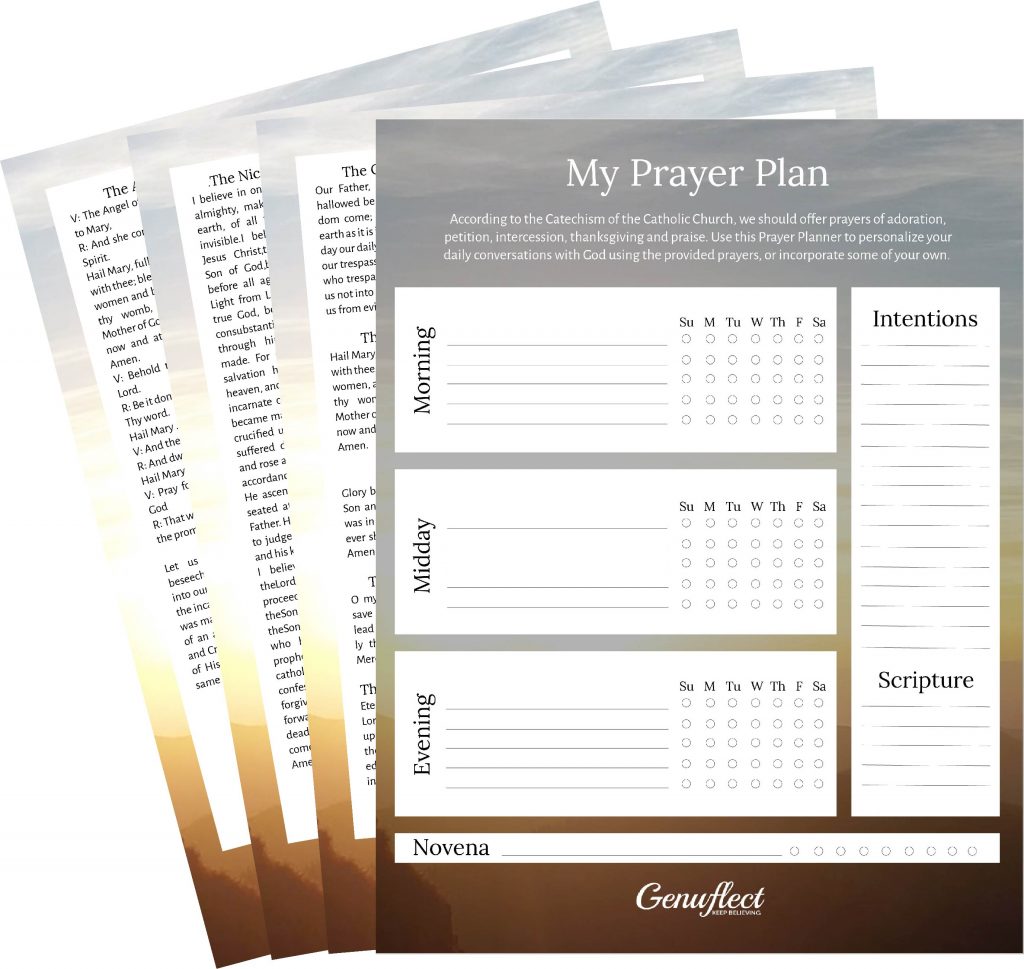